In one of your recent projects – Reef – elements of the coral reef have been made from plastic bottles, containers, straws, etc, thrown away by people. Ironically, you showed them in their full glory, colours, imitating the sea movement. Do you believe that we are doomed to artificial beauty?

It would be quite apocaliptic to think this way. Although I raise a subject that in fact foresees this apocalypse, I believe that we – as human race – are still capable of undoing that. The global market tries to annihilate with all its strength natural ecosystems, chop down rain forests, pollute the atmosphere and acidify the oceans, but this is still not a lose-lose situation. People’s awareness of the adverse changes in the climate is rising, and now – at the time of the COVID-19 pandemic – it is even more clear how grave the threat is. Such game changers can not only bring real effects, but also make the public opinion, and especially the authorities, aware that a change in the models of functioning is possible. Let’s wait and see. So I do not believe that we are doomed only to artificial beauty. There is going to be more and more of that due to plastic materials used and a certain lifestyle that is becoming more and more popular, but nature – although endangered – continues to delight and inspire.

In the near future, MAK Gallery is planning a show of Mariusz Kruk’s assemblages. These assemblages are created of objects found, including pieces of natural wood and those processed by man, like a piece of string, cardboard, etc. This artist shows the natural harmony of the world where people coexist with nature. Can you see a chance for harmonious coexistence of us and the rest of the world?

Until the 19th century people used to live relatively harmoniously with the rest of the world. Of course, the 19th century was critical due to the industrial revolution. It is then that we began to massively exploit the natural resources, emit poisonous gasses to the atmosphere and appropriate land for cultivation, animal breeding, etc. Before that, as a species, we were not blameless. We allowed a great deal of animal species to become extinct, which were simply food for us, but I believe it is one thing to get food in order to survive and it is another thing to overproduce plastic gadgets that briefly please the eye. People got looped in their need to provide infinite facilities, possibilities and pleasures. This has led to a disharmony with the rest of the world. We have forgotten that we are only one piece in a natural puzzle. If we devote enough time to reflect over our place in the natural environment, the chance to harmoniously coexist is quite possible. I want to believe it and I bellieve it.

In 2019, in Poznań Bałtyk building, „Totems“ by Alicja Biała and Iwo Borkowicz were erected showing climate changes and adverse effects of people’s activities. How would you decribe the current role of art? Have you ever encountered a measurable response to your works?

In truth, art has always touched upon the coexistence of nature and people. Perhaphs the climate threats have not been as visible nor have they been the central motif, but between the lines – even on Turner’s paintings you can see how people’s activities (steamships) are changing the landscape. How would I describe the role of art? This is a monumental and very important question. Clearly, there will be no breakthrough in thinking about climate changes unless all the tools at the disposal of people’a intellect are put to good use. Art has this power to become a fusion of information/knowledge conveyed by state and ecological institutions, and NGOs and present complicated solutions in a refreshing and visual way.

Have I ever encountered a measurable response to my works? Yes. The responses have been mainly positive and they bring about a change in the way people think. Something that has only been wishful thinking turned out to bring real effects.

When watching your works from Reef and Gui series, saturated with contrasting, candy colours, containing objects illustrating cheap entertainment and consumptionism, a comparison with pop-art comes to mind. Please, tell us about your inspirations.

When you look at my works, you could actually think that pop-art is one of my inspirations. But is this really the case? Plastic materials which I choose to create could seem pop-art driven and determine the final aesthetic effect. So I would call pop-art only an indirect inspiration. And on the other hand, the inspirations I could with confidence owe to is a mixture of abstractionism, postmodernism and conceptual art, and however banal and cliche it could sound... nature. All its forms, structures and shapes. Anything that is organic, especially water ecosystems. Yes. The synthesis of all this, plus the everyday observation of reality would be my main inspirations.

While at first your sculptures please the eye, and baffle only after a while, the collages you create are disturbing from the start. They show a woman with artificial hair and lips, a man with a diamond instead of a face. The message seems quite similar, but the way of communicating it is here more literate and direct. Did you at some point decide that the ironic and ambiguous message (as in Reef) is more effective?

This, I believe, is the effect of my natural development as the creator. Collages were made between 2012 and 2017 when I constructed my motifs differently. The message that could be read from Reef project was never supposed to be ironic. I do not mock the topics I raise, it is not my intention to joke about the way of consumption that we succumb to. I turn attention to topics requiring some reflection. I agree with the ambiguity. I wanted to show the multidimensionality and complexity of the overuse and overproduction of plastic. It would have been to simple to show the problem of plastic straightforward. The message could get lost in an avalanche of images we are now drowning in. Apart from that, being straightforward was never my strength. I like it when art has some kind of twist, it is something else that it seems at the beginning.

What is your process of creation? Do the objects found/collected inspire you to a piece? Or it is the other way round, do you find objects to suit your vision? It seems that coral reef installations require tedious and elaborate work? Do you create your sculptures only for photographs and then – what? Do you discard them?

First, I observe. I follow a phenomenon, a problem. I look at it, analyze it. Then, I select the appropriate media (here plastic), in my works I take care for these elements not to be accidental. The next stage is to arrange the elements to fit my imagination/vision. At this stage, I allow my intuition to come up with certain solutions. Next, I juxtapose my intuitive solutions with the concept in my head, and as a result of this synthesis, the pieces come into being. I create the sculptures for the sculptures, rather than photographs. I need a three dimensional way of expression. Photography is only some kind of documentation of these scuptures, but also an additional medium which magnifies the significance of the motif raised. And what do I then do with these sculptures? I do not discard them, oh no. They are just pieces on their own. I keep them for shows, etc. If I discarded these pieces, it would be hipocritical, and all the process I just described would have no sense. 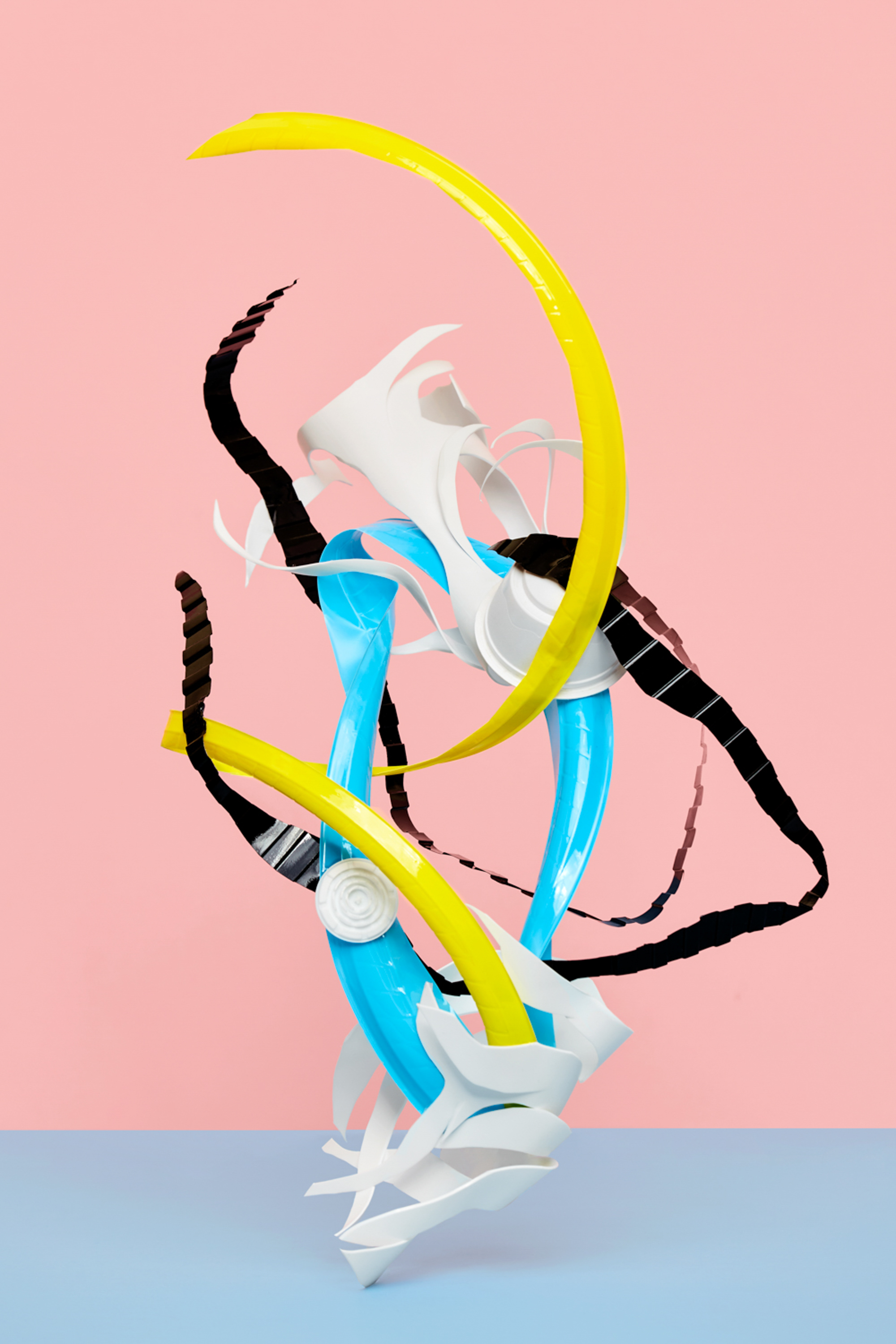 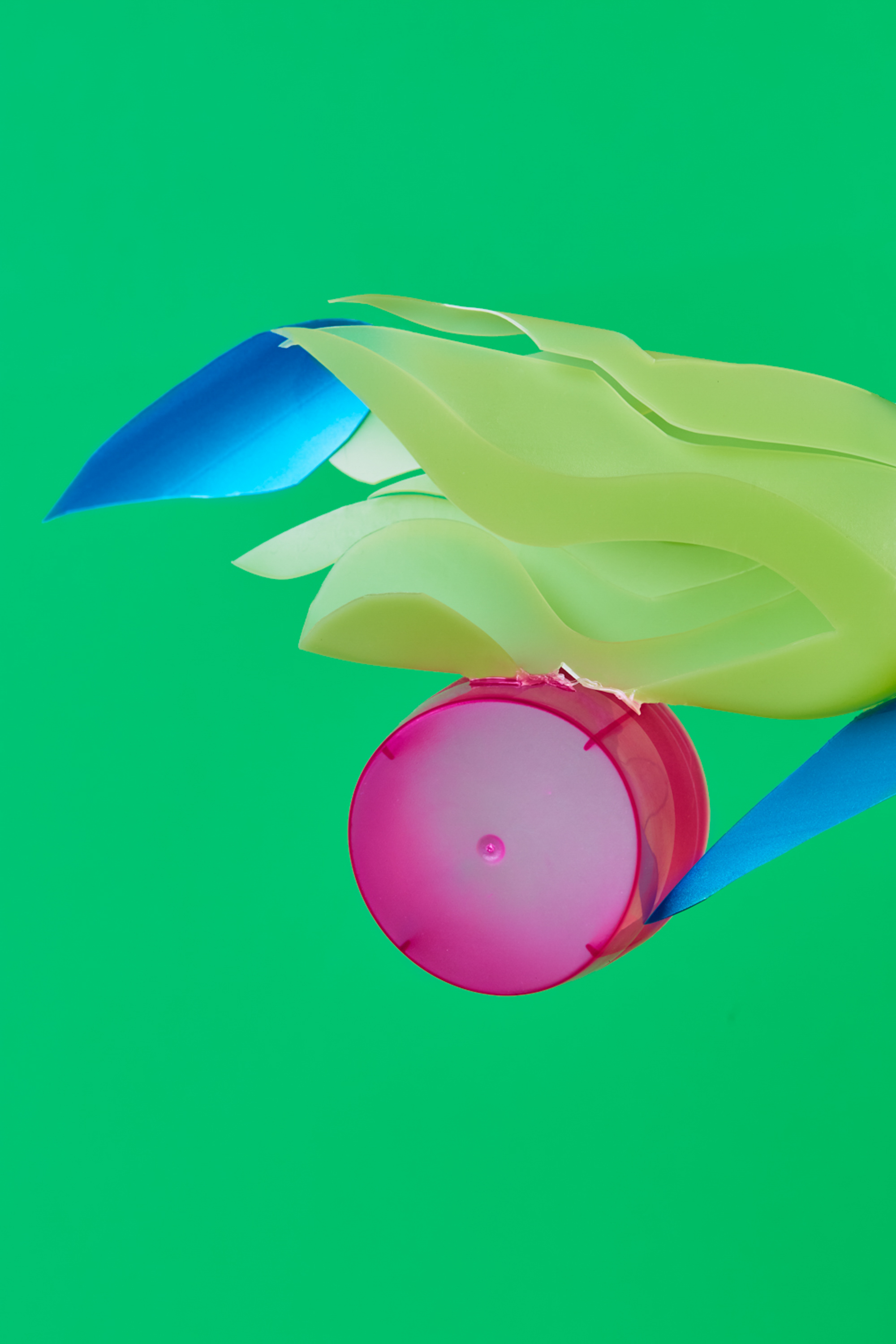 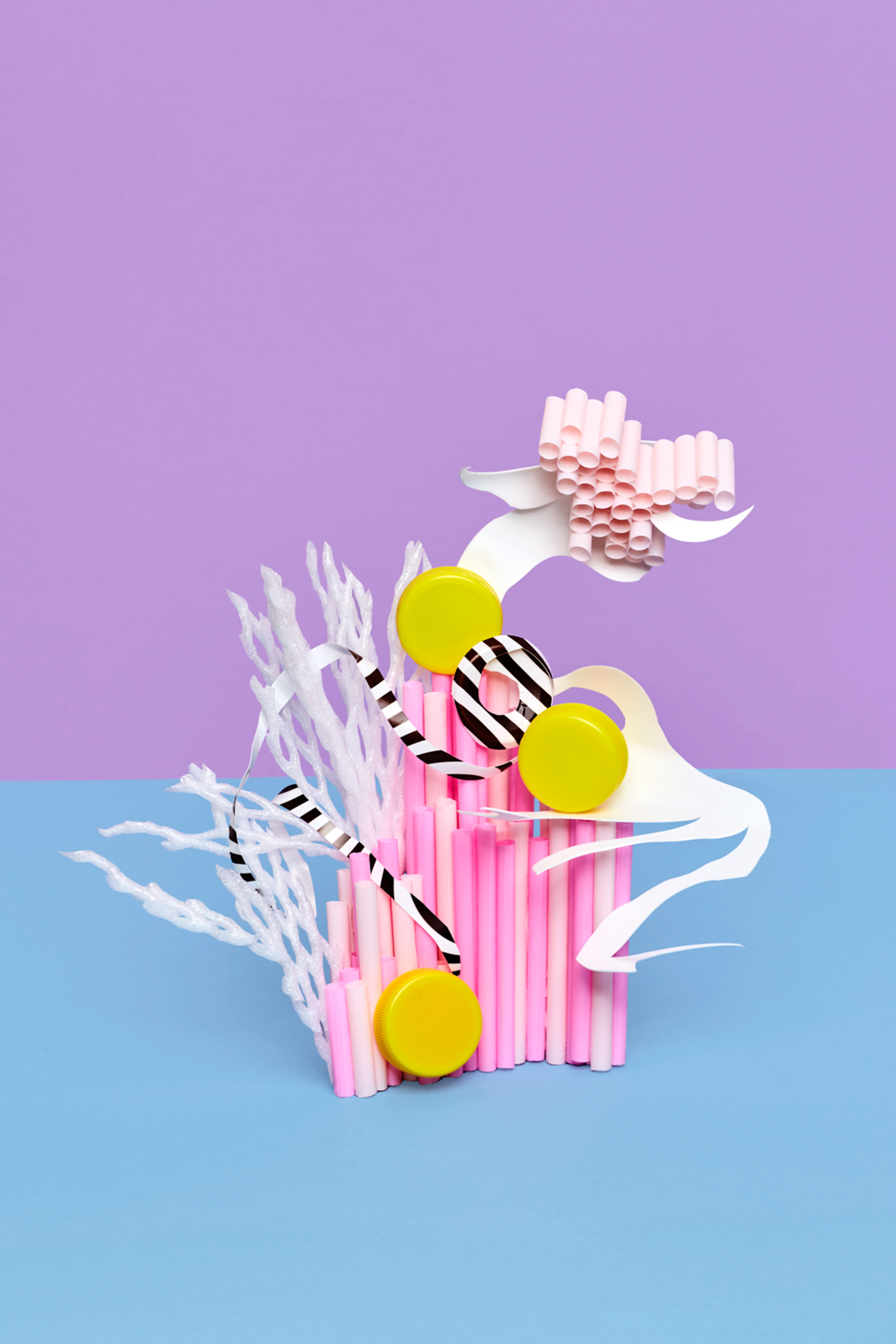 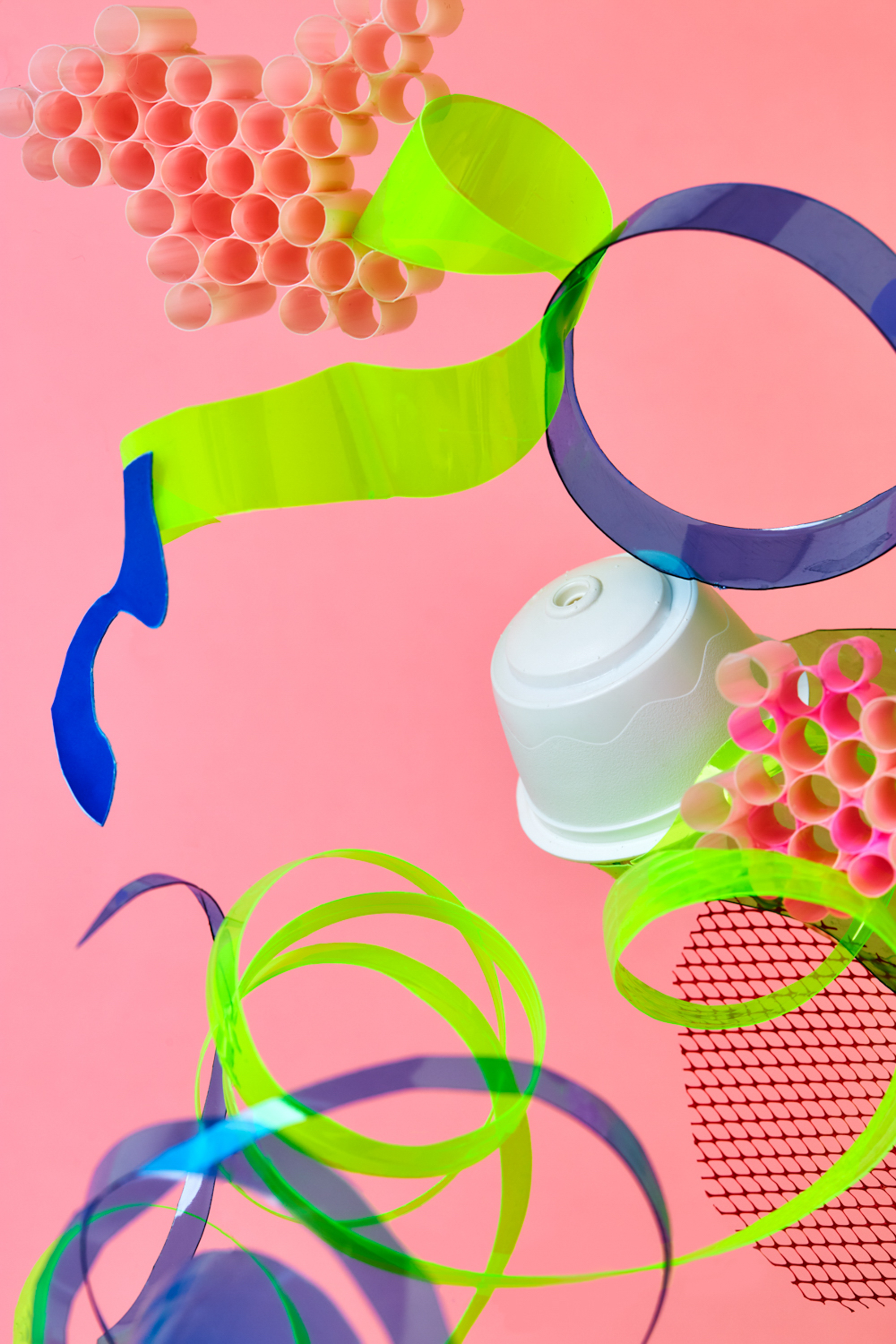 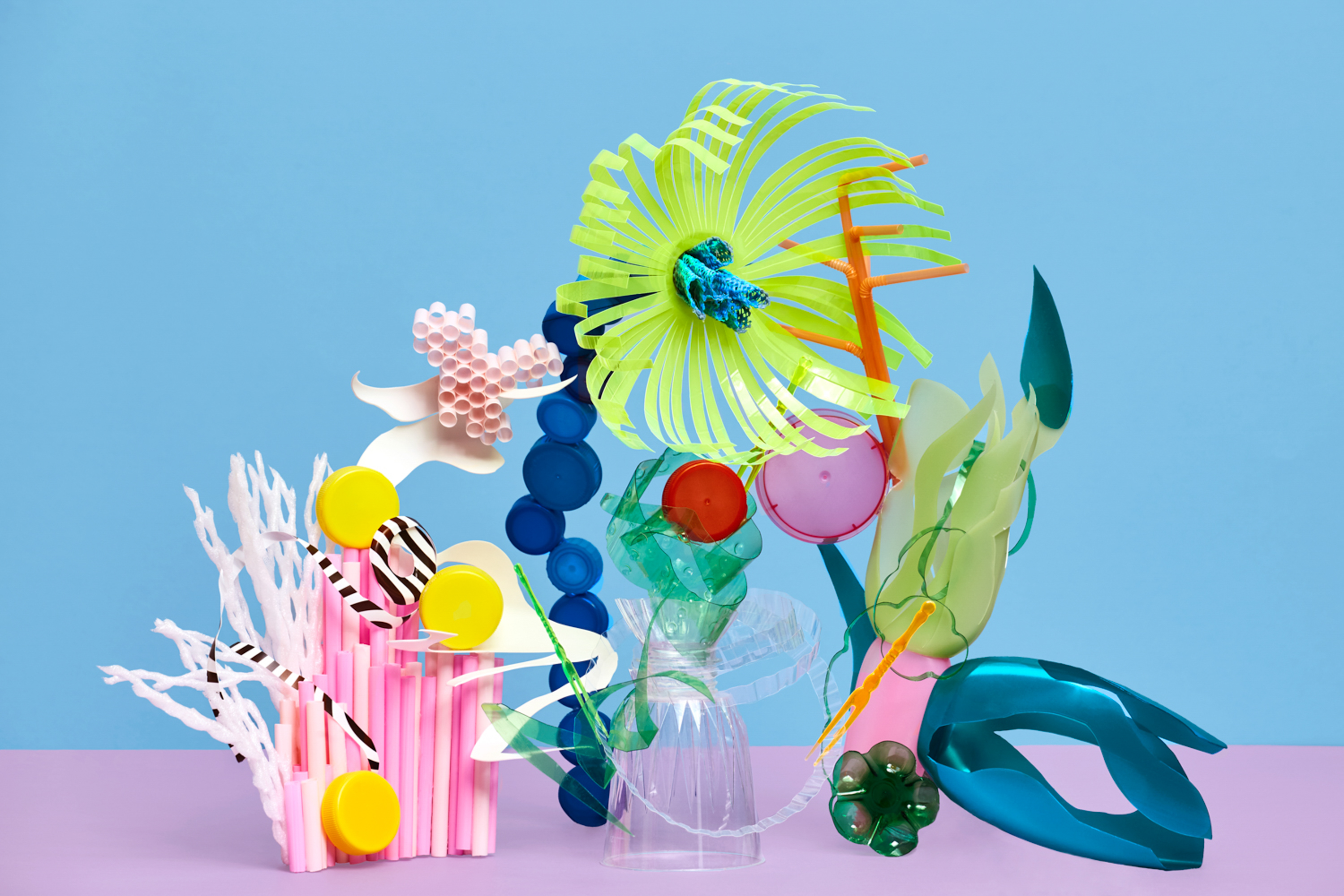 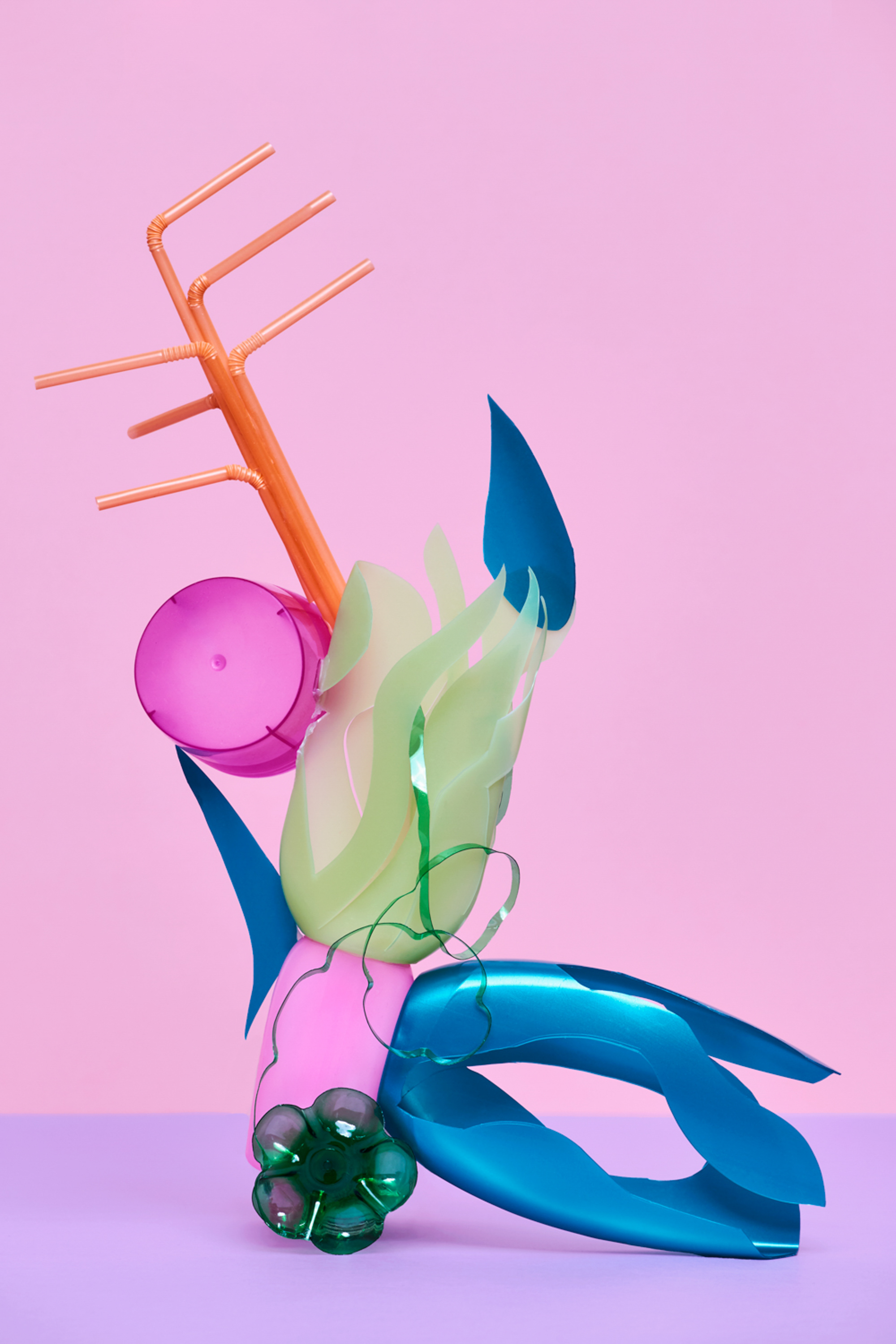