Paintings from your 100% Masculine series echo socrealist monumental art. Is the ironic way the characters are portrayed (Knight in the tiger skin), their unobvious body view (Bum, Unknown #7), eroticism of some of them, a way of settling with the country's past?

Rather, it is a way to deal with nostalgia for the past. I think nostalgia is a feeling that impedes progress. Many people now live with thoughts of what was better in the past. For me, socirealism is associated with - patriarchy and totalitarianism.

The same question practically refers to Personal Monument performance presenting a scultpure in pink bringing to mind erect penis and left against a number of socrealist buildings and statues in Minsk. Please, let us know how are artistic actions perceived in public space in Belarus both by the society and the country's authorities.

The action Personal monument was originally about the human right to speak and act in public space. But then it turned into a political one. One of my volunteers was beaten by the police, and I was fired from work. Many state cultural organizations refused to work with me. The art community supported me, and we managed to win the case in court. I was falsely accused of resisting the police. Local human rights defenders worked with me.

You have experienced living in Belarus under tight communist regime and its relaxation after 1990. What has this experience given you as an artist? Have you ever used art as a tool against communism? Any consequences?

The communist regime fell when I was 14 years old. I work with this experience when I write literature. As an artist, I use art as a tool against authoritarianism and Lukashenko’s regime.

In the series of performances I am not.... you reach to Belarussian and Polish stereotypes. From our Polish perspective, I am not a Jew carried out in Poland seems to be very accurate. Did you do any research on stereotypes in both countries? And did you notice any differences in perception by the public in Minsk and Warsaw?

About performances I am not ... there is a good text by Olga Shparagа:

“Four out of five actions from the series I am not… were performed by the artist in Minsk during 2008, the fifth one I am not Jew in Warsaw. The Minsk actions were recorded and uploaded on YouTube. For these performances, the artist hung a board with words around his neck, while wearing the items of clothing corresponding to the words on the board. For example, he used women's clothing and women's make-up in the action I am not a Gay; shorts, sneakers and a burger in his mouth for the action I am not American; a black beard and an Arab head dress for the performance I am not a Terrorist.

To perform the action Ich bin kein Partisan (I am not a Partisan), the first one out of a series, Hulin took his shoes off and walked round the city barefoot. To denote the connection to the national symbols of Belarus, he was wearing a pair of red trousers and a green T-shirt. This very first action was a model for the following performances: the board added an extra meaning, since it made a reference to the socio-realistic paintings which portrayed executions of Soviet partisans in fascist times. Such a reference could be interpreted as an indicator that it is the Soviet past and memories of war times that separate the private experience of the painter with from the public space. This is, in a way, like a gate.

This so-called gate allows us to make judgments of a layer of social life which could be described as the formation of the Belarusian collective identity through memory. Other critical layers of memory in Belarus could be expressed by means of expressions “I am not a collaborator”, “I am not a Stalinist”, “I am not affected by the Chernobyl accident”.

To detect these expressions would indicate that the formation of memory by different groups and communities is silenced in Belarus and that the government imposes the “right” and the only opinion about history. As a result, the most important topics of the past, such as illegitimate state violence, the relationships between victims and executioners, the role of “a common man” in history, as well as the gender dimension of the Great Patriotic war, and others are left without being considered. This leads to the situation where both these problems and current problems are also silenced.

In this case, the action I am not a Gay refers us to the layer of social, ethnic, and other subcultural groups which are invisible in Belarusian society. In this regard, the expressions ‘I am not a woman”, “I am not disabled”, “I am not a Jew”, “I am not a pensioner” could be put in one line with expression “I am not a gay”. It is favorable for the Belarusian authorities to treat the society as a homogeneous unity or as a unity without distinction, since this allows them to speak on behalf of the whole society. Therefore, the invisible groups get marginalized, that is, lose their rights to equal coexistence with other groups.

The identity hidden behind the saying I am not American can help to deal with others, such as the Europeans, the Russians, the Chinese. In Belarus they are viewed as “others”. By controlling, especially through the media, our attitude towards these “others”, the Belarusian authorities make us feel rejection of them. The performance has actually demonstrated that the authorities have succeeded in doing so: none of the viewers had any objections, even though the action showed the obvious disrespectful and sarcastic attitude toward “another” (an American).

The fourth expression I am not a Terrorist can be interpreted as a generalized opinion about an external and internal threat to Belarusian social stability. Although after the explosion in the Minsk metro or the economic crisis the character of this threat could have changed, it still retains its importance and can be expressed in the statements “I am not a victim of the explosion in the metro”, “I am not affected by the crisis”, “I am not unemployed”.

In Poland, I had an exhibition in Warsaw, and I received advice and support from the Polish curator. Initially, I wanted to make a performance I am not a Jew in Minsk.

How important to you is interaction with the public at your performances?

Previously, I was reserved about the reaction of the public and did not try to contact the viewer. Now I really like contact, not only during performance but also at exhibitions. I talk a lot with the audience and turn everything into a performance. I can get very interesting and unplanned results.

Most of your performances are socially engaged, they deal with the country's past, the society's prejudices, the role of artist in the society. Is this conditioned by the place where you live? Do you see yourself as a contestor for a cause? Don't you think that art emotionally and personally engaged is more "attractive" for the viewers?

In my work there are two general directions. First - This is public prejudice, the role of the artist in society, politics. The Second - Is the history of art and the place of art in human life, the economy and the art market. The place of residence and politics in the country have a great influence on me. Censorship, prohibitions and the economic situation of the artist in Belarus impede full expression. I would be more involved in installation, sculpture and performance. Painting is part of my economy and it is an inexpensive and mobile way to realize my ideas. Emotional and involved art allows you to better understand the problem with which you work as an artist.

Your Duel performance reminds Marina Abramovic's Rythm 0 where one of the viewers brings a gun against her neck or The Other: Rest Energy where Abramovic remains at risk for the entire time of the performance. Who inspires you most as an artist?

Of course, Marina Abramovich remains an important person for any artist who is engaged in performance. And for me, as an artist, it is important that the viewer believes in the reality of my emotions and experiences real tension or joy. The most important artists for me at the moment are Maurizio Cattelan and Yuri Albert. Baldessari, Erwin Wurm and Elmgreen&Dragset. I like some works by Pavel Althammer, Rafał Bujnowski, Oscar Davidski and Lithuanian Jozas Laivis. 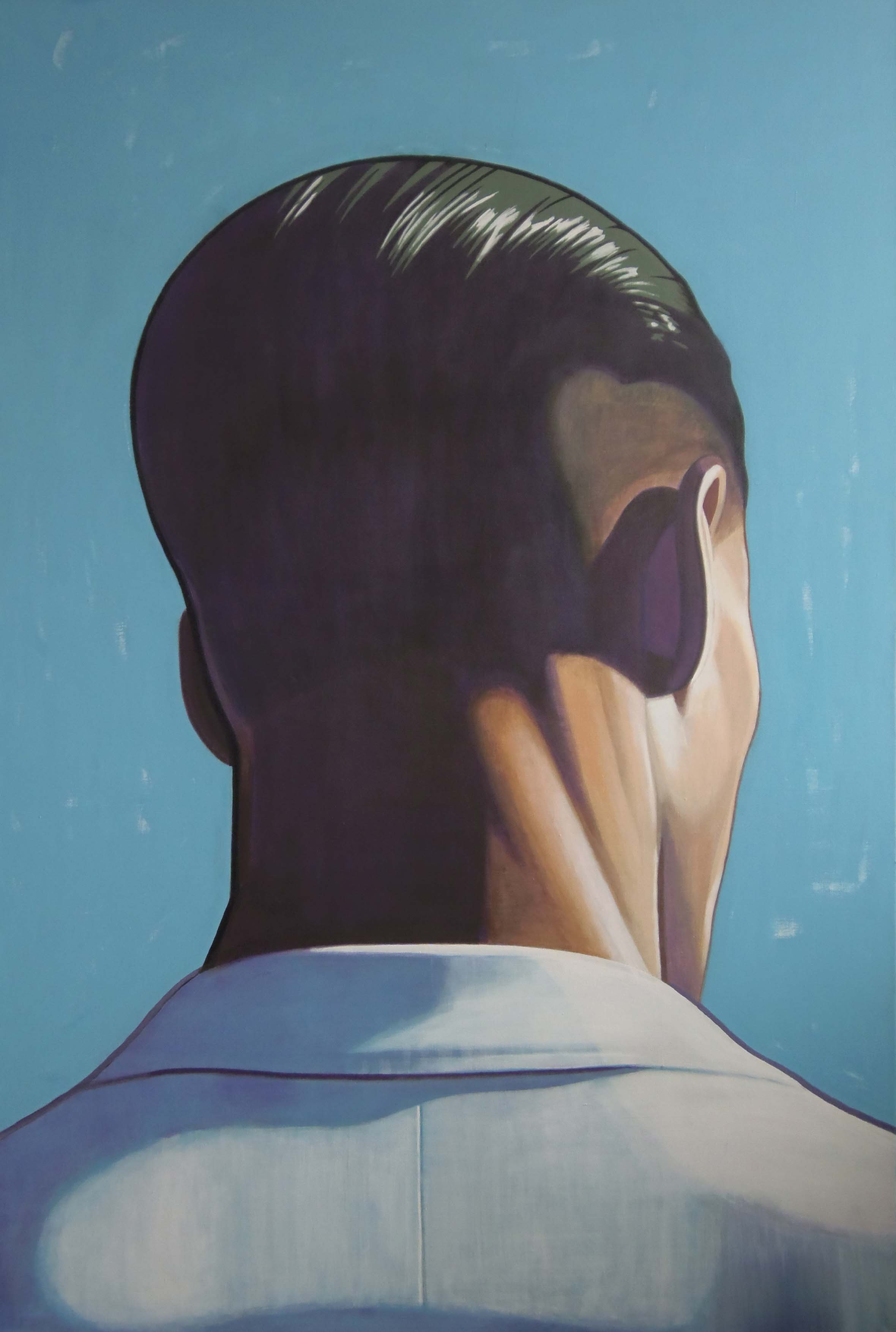 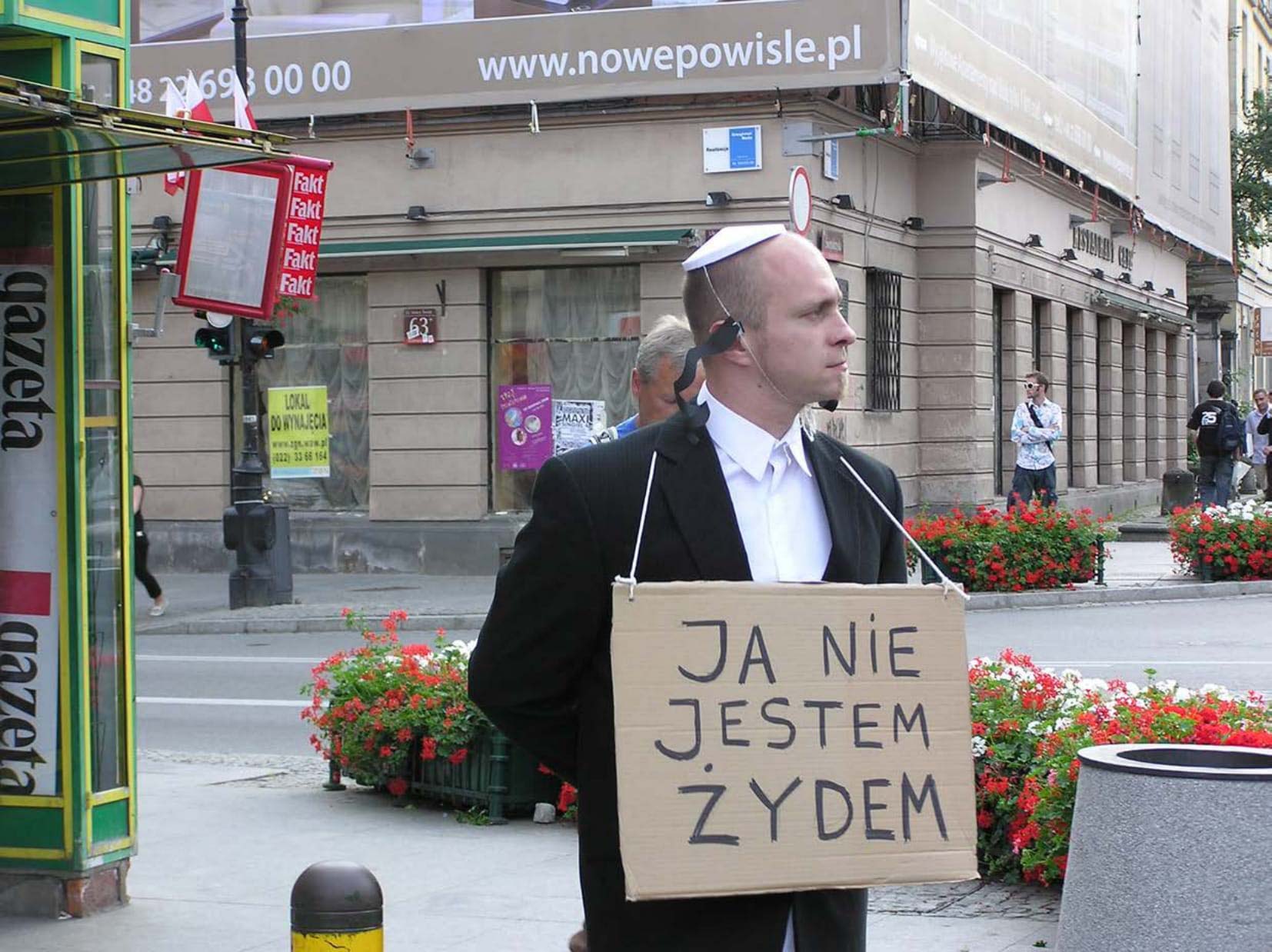 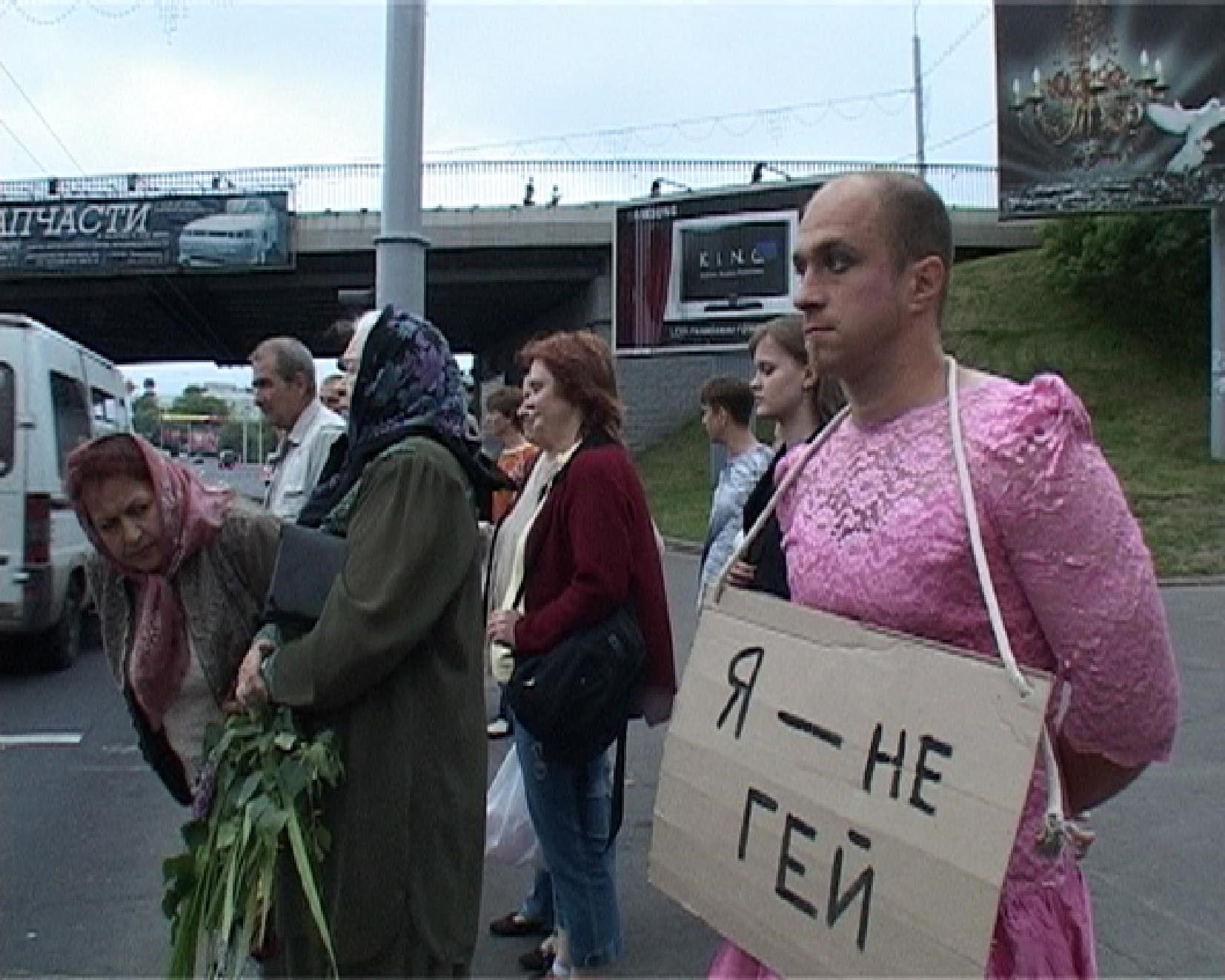 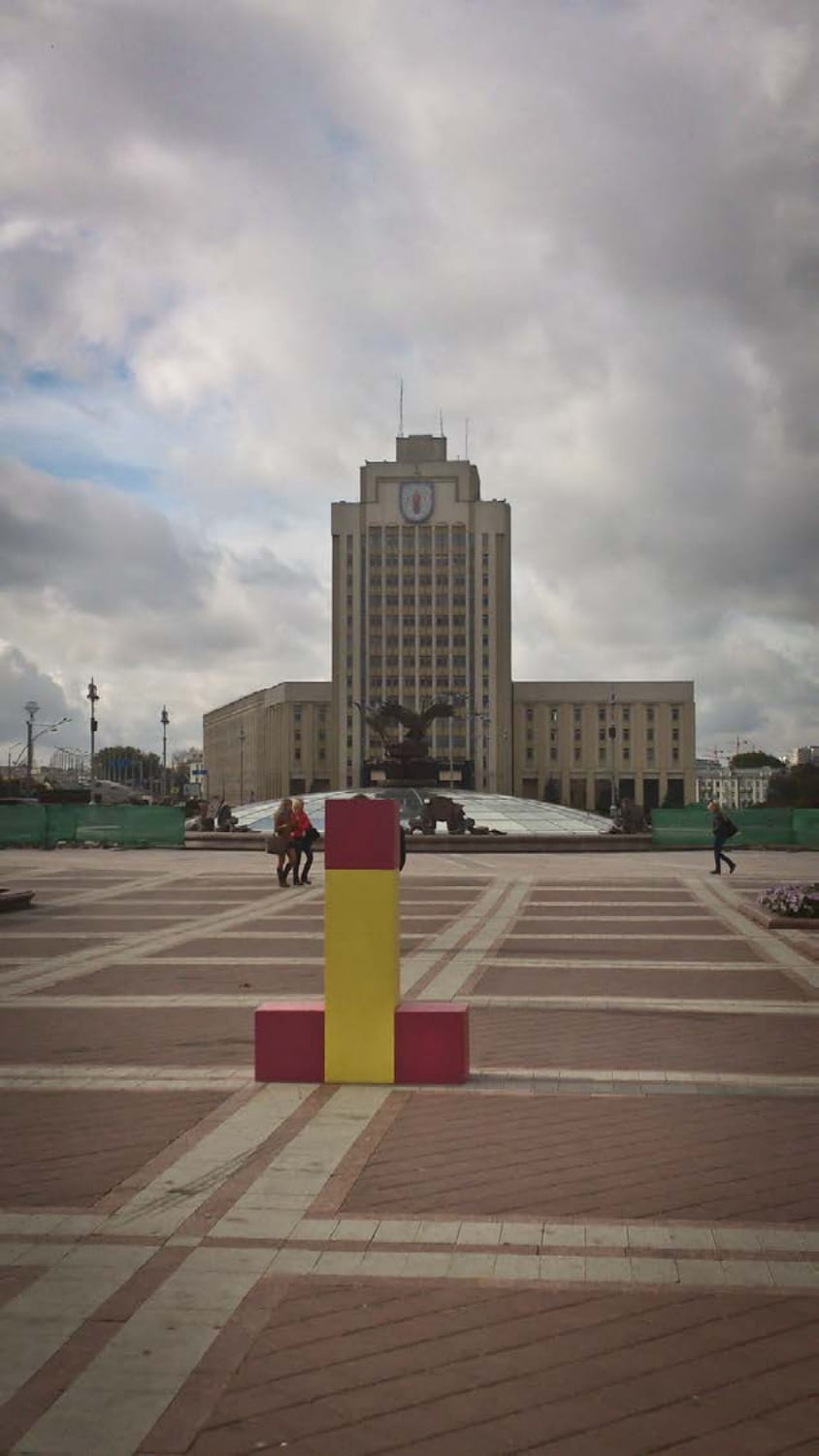 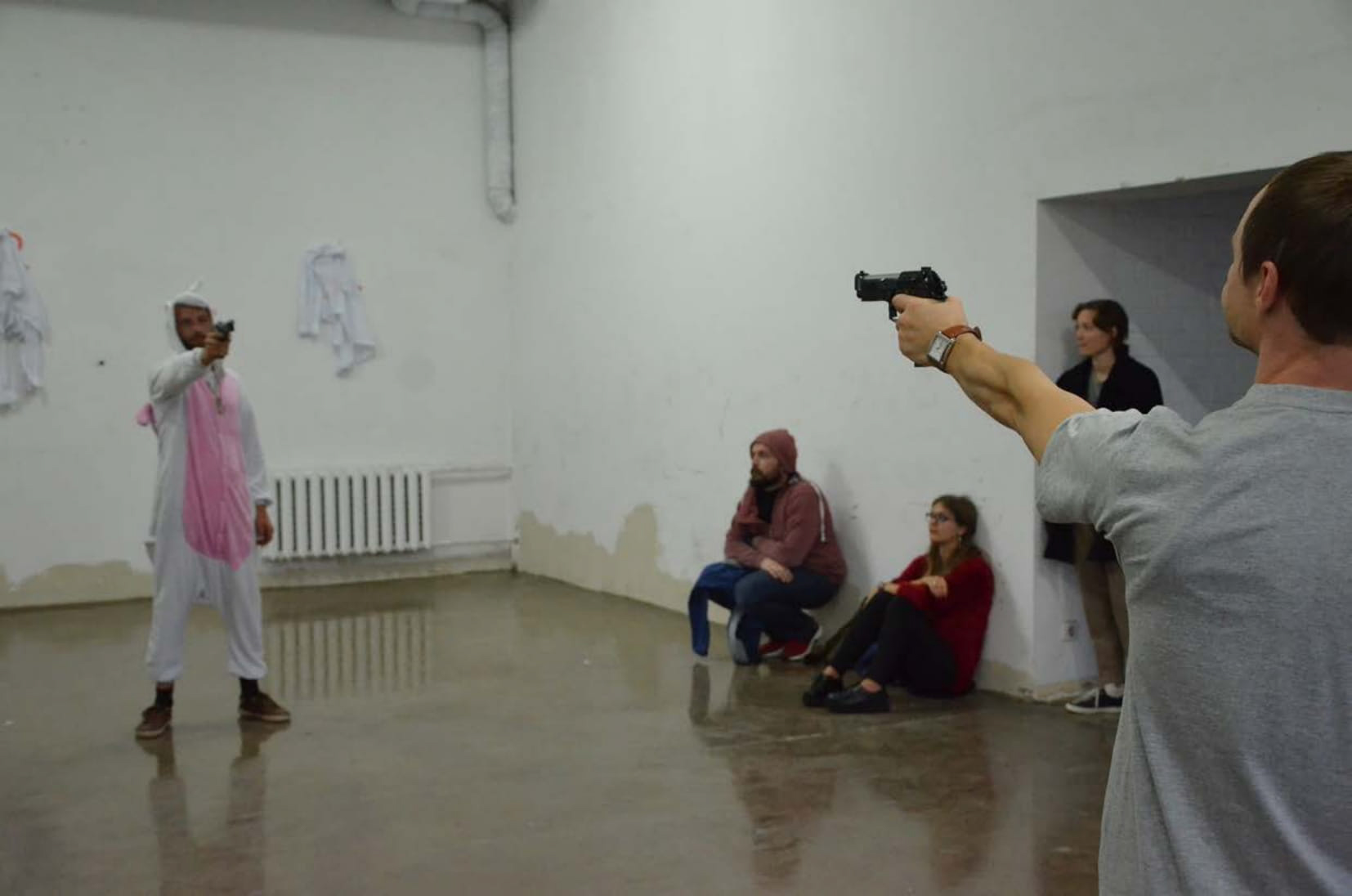